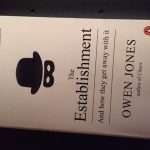 Living and working in the Irish Midlands can sometimes mean not being familiar with what is being thought, said and done elsewhere. Occasional visits to the News from Nowhere bookshop in Liverpool’s Broad Street have brought opportunities to buy books that might not readily be available in rural Ireland, but even then, it can be months before there is time to read them. So it is that last October, The Establishment: And how they get away with it by Owen Jones, was bought. The Penguin paperback edition was published in the spring of last year, before the May general election which would have further shaped the opinions expressed. Only now has there been time to sit down and read it.

Jones is open about his radical views, much of what he writes and many of the conclusions he draws might be anticipated, but sometimes one wonders about the assumptions he makes. In a chapter on the role of the police in protecting the powerful, Owen Jones interviews Peter Kirkham, a former chief inspector in the Metropolitan Police. It is alarming that Jones sees nothing to be challenged in Kirkham’s assertion regarding English society and the place of the church in that society:

`I’m not saying there’s no racism — there probably is a bit,’ Peter Kirkham admits. ‘I don’t think it’ll be very much overt racism because I don’t think you’d get away with it … There’s probably quite a significant amount of stereotyping still because the training hasn’t been taken on as well as it should’ve been.’ But for Kirkham, it is society as a whole that’s at fault, not the police. ‘You go to a Muslim country, it will be set up for the convenience of the Muslim religion,’ he suggests. ‘You’re here, it’s set up for the Christian religion; a Christian country, with the Church of England … of course we look at the world through our eyes, white Western European, Anglo-Saxon, English history, and so on. This country is set up for the convenience of those people, therefore the whole set-up is institutionally racist for anybody not of that background to a greater or less extent.’

Peter Kirkham has stated that society tends to be racist because it is set up for Christians, for the Church of England. Owen Jones accepts Kirkham’s view, his concern is that it deflects attention from police racism:

It is a worrying rationalization — that a country is somehow inevitably structured to meet the needs of the majority ethnic group. It deflects from what is so dangerous about institutional racism and the police — the fact that they have unique sweeping powers to deprive people of their liberty.

For all of its faults, and there are many, the Church of England has been active in the struggle against racism, in its care for communities it has a vision far broader than that arsing a white, Anglo-Saxon, English history, and it seems less than charitable that Jones would allow the church to be thus depicted.

Perhaps the Church Times picked up the comments and responded. It carried a review of the hardback edition of The Establishment under the heading of “Powerful Brits . . . if there are any now” The reviewer was formerly  on the staff of one the newspapers excoriated by Jones and, reading the dismissive review, there is a temptation to say, “Well he would say that, wouldn’t he?” Apart from the review, Owen Jones’ book seems to have been ignored by the Church of England’s main journal.

Does it matter? Up to July 2015, The Establishment: And how they get away with it had sold over 140,000 copies, in the world of non-fiction publishing, it is a major bestseller. It is a pity that the Church Times did not at least get someone from the Church of England to review it; someone who might have taken issue with casual assertions about the place of the church. It is a pity no-one from the Church of England wrote to the Church Times at least to protest their depiction in a best-selling publication. 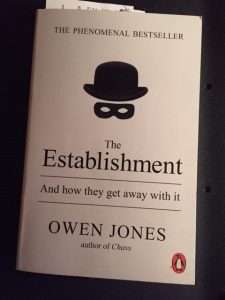