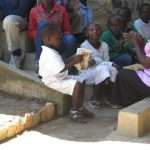 It is that time of year when good and sincere people around the country will be packing shoeboxes to send to children overseas. If we are Christians we need always to be mindful that we are doing things in the best way; we need to ask how we might best serve Jesus and his Kingdom; we need to think about the shoeboxes. In 2007, I wrote the following paper for a world development group.

Since Charles Dickens wrote A Christmas Carol in the 19th Century, our popular conception of Christmas has been increasingly idealised and sentimentalised. The narrative of the birth of the Christ-child in Bethlehem has been mingled with our contemporary stories about Santa Claus coming to fulfil children’s greatest wishes. It has become axiomatic in more recent decades that Christmas is entirely dependent upon gifts for children. To question the assumptions surrounding our contemporary Christmas has become paramount to heresy. Someone might appear on television or speak on the radio entirely dismissing the narratives of the birth of Jesus from the Gospels of Saint Matthew and Saint Luke, but can you imagine the row that would ensue if someone said that Santa Claus did not exist during a prime time broadcast?

The emphasis upon children at Christmas has given rise to thinking that whatever is done for children at the Christmas season, even if it is a flight to Lappland to see Santa, must be a right and proper course of action. Suggesting that wisdom might lie elsewhere is to assume the role of a pre-apparition Ebeneezer Scrooge.

Jesus is never sentimental in his attitude towards children, in fact he accords them a great deal more respect than is possible in modern conceptions of them where they are reduced to objects for adult attention. Jesus regards children as being more perceptive and having a clearer view of reality than their older counterparts, “At that time Jesus said, “I praise you, Father, Lord of heaven and earth, because you have hidden these things from the wise and learned, and revealed them to little children.” Matthew 11:25

The Gospel understanding of children is far removed from the passive, staring faces that appear in some literature. The children Jesus encounters and praises are children who recognize things as they are, sometimes speaking the thoughts that adults are afraid to articulate, “Do you hear what these children are saying?” they asked him. “Yes,” replied Jesus, “have you never read, “‘From the lips of children and infants you have ordained praise’?” Matthew 21:16 It is this spiritual fearlessness in children that Jesus recognizes as necessary to true discipleship, “And he said: ‘I tell you the truth, unless you change and become like little children, you will never enter the kingdom of heaven'”. Matthew 18:3

Children in Jesus’ presentation of them are not anodyne characters, nor are they simply the passive subjects of a constant bombardment from the outside world, they are people who will say difficult, awkward and sometimes unpopular things, “They are like children sitting in the marketplace and calling out to each other: ‘We played the flute for you, and you did not dance; we sang a dirge, and you did not cry.'” Luke 7:32

As Christians, in considering aid to children, our touchstone will be Jesus himself. Do our dealings with children bear the mark of Gospel encounters? Do we regard children as Jesus regarded them, as individuals with their own rights and dignity, or does our presentation of them, in our appeals for aid, reduce them to passive figures in need of our charity, who are delighted to receive whatever we might send them?

How would Jesus have responded to the needs of children in poor communities? If our response is not consistent with Jesus’ treatment of children, then it is not a Christian response.

Drawing upon the accounts of Jesus’ dealings with people provides a model for good development. Jesus’ ministry focuses upon empowering people to reach their full God-given potential. Standing in the synagogue in Nazareth, he sets forth his purposes in plain and unmistakeable terms:

“The Spirit of the Lord is on me,
because he has anointed me
to preach good news to the poor.
He has sent me to proclaim freedom for the prisoners
and recovery of sight for the blind,
to release the oppressed,
to proclaim the year of the Lord’s favour.” Luke 4:18-19

In teaching and in healing, Jesus empowers his listeners to be what God desires them to be. A Christian model of development will prompt us to ask whether people are being empowered by work that is done. Do activities enable them to make their own decisions and their own choices, or are the activities more concerned with promoting the desires and the purposes of the donors? Particularly with regard to children, are they being empowered to live a life that is life in all its abundance?

A Christian understanding of good development will be strongly informed by our understanding of good stewardship. The most familiar model of stewardship in the Gospel is the Parable of the Talents, the mandate to make the best possible use of the resources we are given. A satirist in the 1980s once engaged in a particularly black piece of humour by commenting that, “The money it takes to feed an African village would provide a nice little girl in Surrey with a pony.” Extreme words, but maybe they should provoke us to consider how effective is our stewardship of resources collected to provide aid to the world’s poor. Money spent on unnecessary, inappropriate and expensively-transported items is money that could be spent on transforming lives. We need particularly to be mindful of being shaped by our own culture; a culture that sets great store by children getting substantial gifts (whether it be a pony or something lesser), is not necessarily a culture that enables us to reflect on what is the best stewardship of the limited resources available to us. We need to be wary of starting out with five talents and not even producing one more for the Master.

If empowerment is a reflection of Jesus’ ministry and effectiveness is a mark of the good stewardship he desires, then development that is enduring is development that reflects the impact that Jesus had on people’s lives. Is what we are doing something that is enduring, something that is sustainable? Will the children we are seeking to assist be able to look back in ten years time and feel that the projects undertaken were projects that changed their lives permanently for the good?

As Christians who believe the Good News, it is not unreasonable to ask if we are associated with the best mission practice.

Irish people, of all people, should be wary of bad evangelism (if that is not an oxymoron). The disastrous efforts of sincere evangelical Protestants in the mid-19th Century at the time of the Great Hunger in Ireland poisoned relations between churches and enabled the creation of the term “souperism.” Attempting to make converts by handing out assistance failed as a form of evangelism, (perhaps because it is at such variance with Jesus’ way of doing mission), yet such missionary endeavour persisted through the 20th Century, characterized in more recent times in various places as “cargo Christianity”‘or “rice Christianity.”

The Gospel stands by itself; it does not need material incentives. Nearly forty years after Vincent J.Donovan wrote Christianity Rediscovered: An Epistle from The Masai, there is still a persisting belief that converts can somehow be bought, that by putting material things into their hands, we can make them more receptive to the Gospel. Many of those who experienced such attempts at mission during childhood days will be aware that children, particularly, will recognize a lack of integrity, they will know if there is a sting in the tail of receiving a gift.

In considering aid and children we need to address three simple questions:

Is what is being proposed consonant with Scripture?

Is it consonant with the best development practices?

Is it consonant with the best mission theology?

If the answer to any of those questions is “No”, then we should conclude that we cannot with integrity engage in such projects.

“Which of you, if his son asks for bread, will give him a stone?” asks Jesus. Are we too often giving stones and not bread? 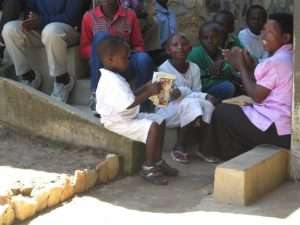