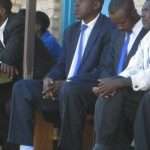 Wearing a grey suit to Dublin for a meeting and taking three hours to return through heavy traffic, there was no inclination to change into casual clothes at the end of the day. Millie, our dog, awaited her nightly walk, and having taken off my overcoat and jacket, it seemed easiest just to put on a pullover and anorak. Suddenly, there was a moment of recollection: Sunday evening at school and the house staff who had worn suits in the morning now dressed in suit trousers and pullovers; collars and ties visible under V-necked and round-necked sweaters. The recollection was so vivid that I picked up my jacket and back overcoat and put them on again, overdressed for walking the dog, but easier than resembling those who watched over us in the oppressive atmosphere of those distant weekends.

The evangelical Christians who ran the school seemed to have an unwritten dress code. Suits on Sundays, on weekdays men wore plain pullovers and dark trousers and sensible shoes; women dressed as they might have done twenty years previously, as though it were the 1950s and not the 1970s. But why?

Had they been asked by which standards they tried to live their lives, they would have unhesitatingly have declared their commitment to Biblical principles. But where in the Bible was there any requirement to dress as they did? If Biblical rules had been applied, they would probably have been found to have been in breach of Scripture’s instructions; Leviticus Chapter 19 prohibits the wearing of clothing of different kinds of material.

Christians seem often unable to distinguish between principle and culture. To attend church in Africa and see men all dressed in dark suits, white shirts and ties, is to see not adherence to any Biblical rules, but the influence of Western culture. The Nineteenth Century missionaries took with them a complete cultural package; language, laws, gender roles, church governance, architecture, worship, everything European was somehow considered normative. Dressing Africans as Europeans seemed an essential element of evangelization.

Of course, only the most old fashioned evangelical Christians would now appear in sombre suits and sober ties. Strangely, though, Christians have not moved away from the idea that a particular mode of dress is the norm. Middle aged men in evangelical churches still pretend they are twenty years younger and regard open necked shirts with chinos or jeans as pleasing in the sight of the Lord. Having encountered a few such places, what was striking was how similar they were.

It is odd that people most dismissive of tradition and ritual in Christianity are those most bound to worldly culture. 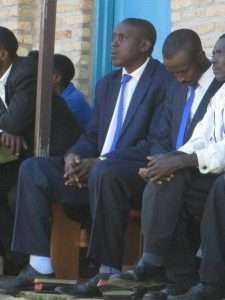