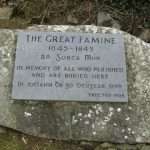 Ireland beat Australia this evening and the song was being sung. There is a great feeling as the words echo around Lansdowne Road. When Ireland are winning a rugby match it is a refrain circulates repeatedly. It’s probable that most of the singers know more than the refrain:

A song that has become so beloved of Irish rugby and soccer fans is a ballad about a young man being transported to Australia for stealing corn to feed his starving family during the Great Hunger, the famine that that brought death or misery to countless people. Being transported was an improvement on previous centuries, when one could be executed for stealing something valued at more than one shilling.

By a lonely prison wall,
I heard a young girl calling
Michael they have taken you away,
for you stole Trevelyan’s corn
so the young might see the morn,
now a prison ship lies waiting in the bay

By a lonely prison wall,
I heard a young man calling,
nothing matters Mary when you’re free,
against the Famine and the Crown,
I rebelled they ran me down,
now you must raise our child with dignity.

By a lonely harbour wall,
she watched the last star falling,
as the prison ship sailed out against the sky.
For she’ll wait and hope and pray,
for her love in Botany Bay.
It’s so lonely round the fields of Athenry.

Would the song be the choice of so many fans if the read accounts of the Famine? John Mitchell, an Irish nationalist who lived through the years of the Great Hunger, described the Irish experience of the 1840s:

A calm, still horror was over all the land. Go where you would, in the heart of the town or in the church, on the mountain side or on the level plain, there was the stillness and heavy pall-like feeling of the chamber of death. You stood in the presence of a dread, silent, vast dissolution. An unseen ruin was creeping round you. You saw no war of classes, no open Janissary war of foreigners, no human agency of destruction. You could weep, but the rising curse died unspoken within your heart, like a profanity. Human passion there was none, but inhuman and unearthly quiet. Children met you, toiling heavily on stone-heaps, but their burning eyes were senseless, and their faces cramped and weasened like stunted old men. Gangs worked, but without a murmur, or a whistle, or a laugh, ghostly, like voiceless shadows to the eye. Even womanhood had ceased to be womanly. The birds of the air carolled no more, and the crow and raven dropped dead upon the wing. The very dogs, hairless, with the hair down, and the vertebrae of the protruding like the saw of a bone, glared at you ditchside with a wolfish avid eye, and then slunk away scowling and cowardly. Nay, the sky of heaven, the blue mountains, the still lake stretching far away westward, looked not as their wont. Between them and you rose up a steaming agony, a film of suffering, impervious and dim. It seemed as if the anima mundi, the soul of the land, was faint and dying, and that the faintness and the death had crept into all things of earth and heaven. You stood there, too, in the presence of something unseen and terrible.

During the horror of the Famine, exports of grain from Ireland continued through the years of hunger – this was more than a natural disaster; human agency played a part in leaving people to endure suffering that might have been alleviated. Tim Pat Coogan accuses the British government of the time of having “genocidal intent.”

It is difficult to disagree with Coogan when one reads declarations of the time. Charles Trevelyan, (from whose corn Michael of the song is said to have tried to feed his child) was Assistant Secretary at the British Treasury during the years of the famine and wrote that the government should not offer much relief to the starving:

The year 2020 marks the 175th anniversary of the Famine; might it possible by then that a different song might be sung to celebrate joyful moments?