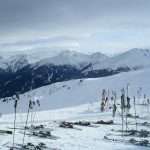 Most of us know someone like them. The person who watches the evening news and finds every item a cause for concern, those who believe every scare story that is circulated, those who express distress at some event thousands of miles away of which you might not even be aware. Were they to be cast as a character from A.A. Milne’s “Winnie the Pooh,” it would have to be Eeyore. But perhaps it is just because they have stopped, perhaps it is because there is nothing to divert their thoughts from the negative things that seem to cloud every perspective.

It is easy for the dark clouds to come rolling in, you are busy, fully occupied, able to account for every waking hour, and then it stops. The daily routine has gone, the familiar faces are absent, the host of tasks that filled the time are no longer there to be done. What do you do when the things that have circumscribed, if not defined, your daily existence are simply not there?

Standing on an Alpine mountainside, surrounded by the winter beauty of Austria, there should be a moment of exhilaration, a moment when you go down a piste, and when there is silence all around except for the wind rushing past your ears, and when you should think, “this is a good place to be.” Instead, you stand looking down into the valley and you watch the gondola and chair lifts, and you watch the cable car bringing people who have travelled on the funicular railway, and the thought that has occurred more than once in the past comes back, “there is more high technology infrastructure here in this single valley than there is to be found in many African countries.”

Of course, the doctor would tell you that it was a matter of chemicals in the brain, that the skiing should be good for the mental health, that the production of adrenaline should be stimulated by the downhill progress. He had said that adrenaline was the problem, that stopping work and going on holiday in September had brought a sharp drop in the levels of the chemical. All that was necessary was to bring the level up and all would be well.

Of course, all was well while the work continued, but there is no familiar work on an Austrian mountainside, only thoughts that cloud the view. 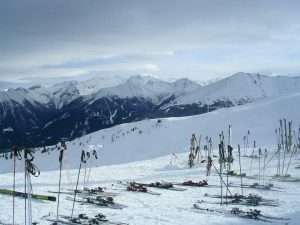