Day pupils were expected to arrive no later than ten to eight in order to have books and other things necessary for the day sorted before chapel at ten past eight. The traffic through south Co Dublin in the years before the motorway was so heavy that leaving the arrival until ten to eight might mean not arriving at the school before chapel had begun. Thus it was that at half past six each morning the alarm clock would ring and between seven o’clock and ten past seven we would leave the house for an eight mile journey that would take half an hour on a good day. Numerous routes were tried, but none proved quicker than sitting in the traffic jams and rolling slowly toward the destination.

Music became an important accompaniment for the journey, particularly the drive back when there was no-one to whom to talk.

It was the 2001-2002 academic year and a station called Lite FM had begun to broadcast in Dublin, their target listenership was those aged over-35, so being 41 at the time, I seemed perfectly aged for the music they played. There was a mix of chart and classic music, but, as the station’s name would suggest, there was nothing that would grate with a more middle-aged audience.

The school run during the winter months was difficult, daylight comes late in Dublin and there were many hours spent following the tail lights of the car in front through the gloom of the dawn twilight.

One song played by Lite FM remains fresh in the memory. Released in February 2002, perhaps it coincided with the returning light after Saint Brigid’s Day. Sung by the Irish singer Damien Rice,”Cannonball” was a song that expressed paradoxes. The refrain goes:

Life seemed paradoxical. Driving a little Nissan Micra through clogged arterial roads in order to reach the most expensive school in the state seemed paradoxical; continuing to try to minister in a parish in a 19th Century way in the new 21st Century seemed paradoxical; much of what had been learned over the previous fifteen years seemed filled with contradictions and paradoxes.

Hearing “Cannonball” now is a reminder of all the paradoxes since, the psychological realities that may discomfit, the internal contradictions that need to be faced, the moments when one is not waving but drowning. 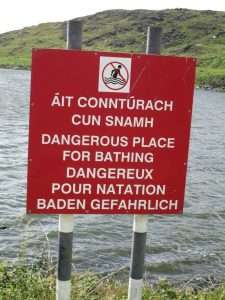