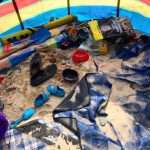 Every year, Wyn Shore would provide silly schoolboys with great amusement. Upon arrival at the beach at Weymouth, Wyn would always hire a deckchair and with the chair under one arm, and her raffia shopping bag filled with supplies for the day in the other hand, Wyn would walk down the beach laughing and chatting as we walked along. The adults would set their deckchairs in a semi-circle, so as best to facilitate the conversation that would provide much of the day’s diversion. Wyn’s chair would always be the target. Conversation would be proceeding cheerily and we would quietly dig away the sand upon which rested the bag legs of Wyn’s chair. Eventually, the legs would descend with a jolt the couple of inches into the hollow we had dug. Wyn would stand up in great surprise and would tell us what naughty boys we were. We would run away with hoots of laughter. Of course, years later, the realisation came that this happened every year and that the reason we chose Wyn’s chair was that we knew she would stand up and shout at us. The downward jolt was no more a surprise to her than the turn of the tide in the English Channel.

In retrospect, we seemed to have travelled very light to that annual day at the seaside. Being a schoolboy meant simply carrying a rolled-up towel with a pair of swimming trunks folded with it. It would be a thin towel, worn from years of use, because good towels were too expensive to be used at the beach. The towel also functioned as a beach mat, a changing robe, and a container into which to fold one’s clothes and shoes when going to the sea.

There was an extraordinary simplicity about the whole experience. Perhaps it was simpler because there was not a single year when it rained, every year the Monday of the outing was fine. If one went to the seaside and the sun was shining, it would have seemed odd to have contemplated doing anything other than enjoying the sand and the sea. Perhaps it was simple because there was no money to pay for anything more sophisticated, lunch would have been sandwiches brought from home in a plastic Tupperware box. The treat at the end of the day was to go to a cafe for fish and chips and peas served with bread and butter and tea poured from an aluminium teapot.

Contemplating how much stuff is now brought to the beach, it is hard to imagine a return to Weymouth days. 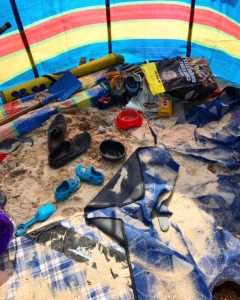