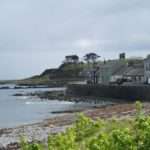 Twenty-five years ago today, 25th December 1993. After church, there was a visit to the local hospital in Downpatrick where two parishioners had been kept in over Christmas. Willie Taylor, better known in the village as “Button” was his usual irascible self. He was sat in bed, surveying the ward and would clearly have preferred to be in his waterfront home in the seaside village of Killough. His health seemed to present no cause for anyone to be concerned and, after wishing him a “Happy Christmas,” I drove the four miles back to where the rectory for my parish lay at a country crossroads. At three o’clock that afternoon, just as the Queen’s Christmas broadcast was about to start, the Rectory telephone rang. Telephone calls were not plentiful, even on ordinary working days, and a telephone call in the middle of Christmas afternoon was not expected.

“Mr Poulton, this is the staff nurse in Mr Taylor’s ward, you were in with him this morning. I’m sorry to say that Mr Taylor has just died”.

It seemed extraordinary to a young cleric in his first parish that a fit and wiry man could just die without giving notice. “But, he was fine this morning,” I said.

“He was, it was very sudden. I wanted to ask you about his sister. I know he lived with her. Would you be able to call with her to break the news? If it’s not convenient, I can ask the police to call”.

Knocking at the door of the cottage where Button had lived with Annie, his widowed sister, no words were necessary. “Oh no, something has happened to Button,” she said, “He has died, hasn’t he?” Annie was well past eighty years of age, her seventy-eight year old brother had been her only companion.

Observing Irish country tradition, ordinarily, the funeral would have been on the third day, in this case 27th December, but Annie had a son in Australia, who had left Ireland in the years when work was scarce. Annie’s son was the only member of her family that she had left and he wanted to come home to be with his mother. The funeral was fixed for 30th December, a Thursday.

Anyone familiar with Irish rural life will know that graves, their location, their digging, their care, their ownership, are a sensitive issue; the slightest mistake can cause grievances that last years, even decades. Having five days to organize the burial of Button Taylor, with churchwardens who kept meticulous records on a graveyard map and register, there was reasonable cause for confidence that everything was in order.

The Sunday after the funeral, the first Sunday of the new year, a churchwarden came into the vestry after the morning service. “Did you hear that it’s been said that Button has been buried in the wrong place?”

I confessed that I hadn’t, and had a sudden moment of panic when the prospect of an exhumation order loomed.

“He is buried where he said he wanted to be buried and as far as I am concerned that’s good enough,” said the churchwarden, “and he’s not going anywhere.”

Twenty-five years later, Button has not moved from his resting place close to the harbour. 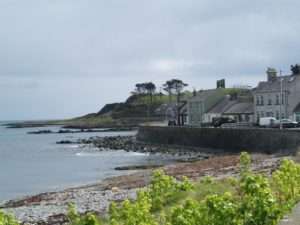