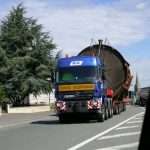 Pass the handful of lay-bys on the A39 in the darkness of a January morning and there will frequently be articulated lorries pulled in, the blinds across their windows showing they have been stopped for a driver’s statutory rest period. England is a small country and the stops along a Somerset road are probably not the quietness before a long journey.

Stops elsewhere can punctuate journeys of a different scale. A service station on a French autoroute can have ranks of lorries, their registration plates an alphabet of European nations. The drivers are seasoned travellers and shrewd with money. Tables and camping stools will appear and meals will be prepared from stores in the trucks. One afternoon a greying middle aged Portuguese driver worked at checking his lorry while his grey-haired female companion set the table for their meal; a scene of domestic tranquility in a car park beside a motorway.

The lorry driver’s life must be filled with hassle. Traffic problems; mechanical faults; incorrect paperwork; the constant fear of stowaways, or of illegal substances, being hidden in loads; the times of loneliness and isolation; but among it all there must be another side.

To be driving southward, through France, day, on a quiet morning would not be such a bad way of earning one’s living, but there’s more than that. The long distance drivers, not those who drive up and down Britain, but those who drive from the Baltic states down to Iberia, or from Turkey up to the North Sea, must watch a landscape constantly changing, seasons advancing and receding at differential speeds.

What seems really attractive, however, is the hours when there is no-one to annoy you; when the engine is running smoothly and the road is open and the forms are in order and when the nearest border is hundreds of miles away. There is no one phoning and no-one looking for you and no deadline to meet other than driving the hours permitted. Such moments would allow time for thinking and listening to the radio and playing favourite CDs and listening to audiobooks and, at the end of the day, being able to rest in the knowledge that there is nothing else to be done.

For such moments, enduring service station car parks would not seem such a bad price. It seems a life apart, a life of contentment in your own skin. Perhaps the men beside the wheel would agree. 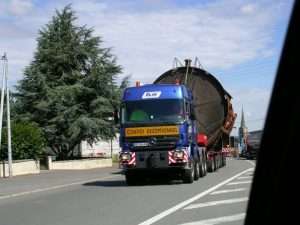